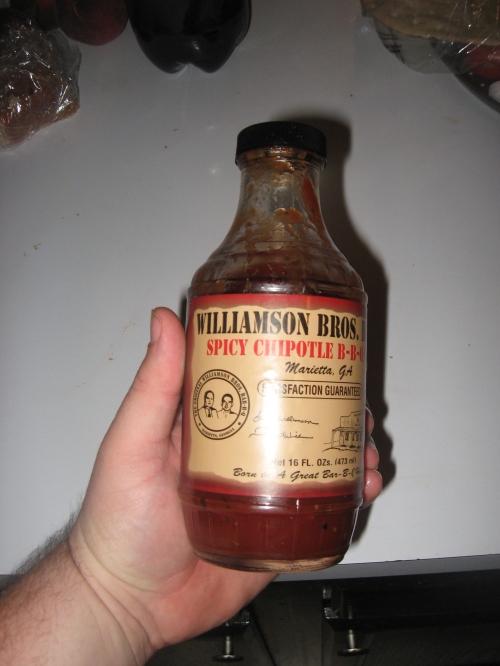 As I’ve previously mentioned, Williamson Bros. BBQ got its start about 20 years ago.  They are based out of Georgia with restaurant locations in Marietta, Canton, and Douglasville.  They have a wide variety of sauces and spices available for sale on their online store.  The star for today, though, is the Spicy Chipotle BBQ Sauce.

The sauce gives an aroma of sweet tomatoes and a hint of spiciness.  When I took a naked taste, I got the same tomato sweetness that the original sauce had.  However, I also got a hint of smokiness and a nice bit of back heat from the chipotle peppers being used.

To the Meat of the Matter

I actually decided to try this sauce on a couple of different things.  This past weekend I cooked a pork butt, so I decided to make a pulled pork wrap using this sauce for lunch. 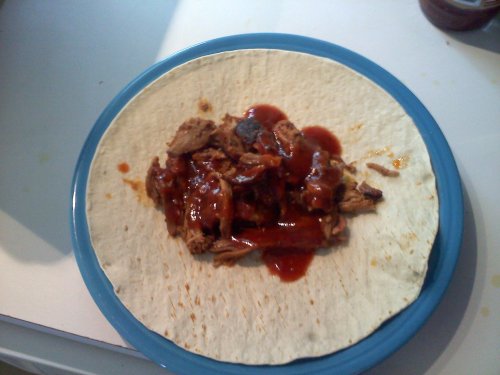 I found that this sauce paired really well with pulled pork.  The spiciness of the sauce complemented the smokiness that was prevalent in the pork.  The tomato flavor tied everything together quite nicely.

For dinner, I had some leftover chicken cooked by my wife.  I took that chicken, chopped it up, and made a sandwich.

The sauce added nicely to the flavor of the chicken.  All in all, I was very pleased with this sauce.  In fact, I prefer the Spicy Chipotle BBQ Sauce to the Original BBQ Sauce.

Williamson Bros. BBQ can be found online at http://www.williamsonbros.com where you can find their sauces and spices available for purchase.